Italy is one of a kind destination in nature, history and creativity. Its charm is expressed in its ambience, in its craftmanship, in its gastronomy, in its magnificent perception of the quality of life as “dolce vita”. Our portfolio has been expanded in this region of the Mediterranean with a selection of distinctive properties encompassing the fairy-tale countryside of Tuscany, fascinating Umbria, emblematic Apulia, cinematic Amalfi and marvelous Sicily.

Apulia is a region with a noteworthy coastline of 865 km across the Adriatic and Ionian Sea, famous for its picturesque historical villages, where traditions remain vivid in daily life. In the countryside of Itria Valley, Murge and Alberobello you can find the trulli, the typical dry stone huts with conical roofs. The truli of Alberobello as well as other emblematic places such as the Castel Del Monte, the Sanctuary of San Michelle Arcangelo and Foresta Umbra Nature Reserve are under the umbrella of Unesco World Heritage Site. Each location has its own special identity:

•Lecce: an art city with elements of baroque reminding of an open-air museum dispalying stuning masterpieces and landmarks.

• Alberobello and Itria Valley: the valley of trulli and picturesque villages like Alberobello, Locorotondo, Cisternino and Martina Franca.

• Ostuni: known as “White City” due to its historical center of whitewashed houses.

• Tremiti Islands: the only archipelago in the region with five islands in a nature reserve with a sea that is highly suggested for diving.

• Torre Guaceto Nature Reserve: a natural oasis and protected sea area, a valuable ecosystem with many a variety of animal species.

• Castel del Monte: it is the region’s most visited monument that is popular due to its peculiar octagonal plan.

• Salento: a charming destination with unique history and traditions, among masserie and white sandy beaches and crystal blue waters.

• Polignano a Mare: located on a rocky cliff overlooking the Adriatic Sea, it is known for its sea caves and Roman remains. 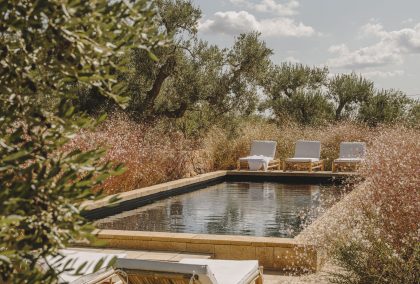 Casa Zelda is a chic hideaway, a stylish and charming holiday house offering peace and quiet as well as a superb and photogenic pool area.The property has been recently restored by a famous Australian designer and it is situated in the heart of Puglia, exactly in Itria Valley, in Southern Italy, between the charming and popular towns of Cisternino and Ostuni. It combines ingenious interior design, al fresco attractions and centuries-old olive groves that form an enchanting ambience for a holiday with friends or family. Casa Zelda consists of the main building with three bedrooms and a separate annex. The two structures are in stone bricks, with terraces and old terracotta, with whitewashed walls and wood. The villa has four bedrooms (with a/c units), four bathrooms, a large kitchen, an indoor and outdoor dining lounge and a spacious living room. All beds are king-size with handmade aloe vera mattresses. Equipment Anticovid sanitation Air conditioning Alarm system Centralized warming Cleaning the pool Garden maintenance Kitchen – with modern high-tech facilities Laundry service Nespresso machine Private parking Safe-deposit box Washer and dryer Wifi Sky TV Netflix The prices include Daily cleaning Final cleaning Change of bed linen and towels every 4 days Extra cost […] 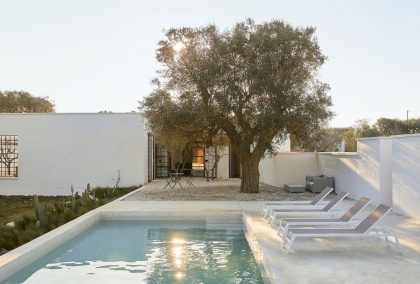 Villa Paradiso is a traditional Apulian country house (also called Lamia)  immersed in an abundant and verdant nature of centuries-old olive trees, almond and fig trees, pear trees and vineyards. The property consists of 2 bedrooms and 2 bathrooms and comfortably accommodates 4 people. The villa sits in a peaceful and private location in Ostuni generously providing fascinating views and relaxing atmosphere. The entrance of the property leads to a large courtyard that surrounds an old “well” and the pool area offers also an outdoor fireplace and magnificent panoramic views. The minimalistic and bright-colour spaces  create harmony in the atmosphere. The living area is an open space with a fireplace, a kitchen and an antique eight-seater wooden table. Equipment Anticovid sanitation, air conditioning, safe, fully equipped kitchen – with modern high-tech facilities, wifi, washing machine, nespresso machine, garden maintenance, private parking, pool cleaning, centralized warming, laundry service, alarm system with camera Services included Daily cleaning, final cleaning, change of bed linen and towels every 4 days Services on request  Breakfast, Chef experience, Yoga, Cleaning, Personal trainer, Massage, Car Transfer Distances The Villa is located near Ostuni and just 10 minutes from the sea. Terms and conditions The booking is considered confirmed once a deposit payment of 50% is made. The balance payment of […] 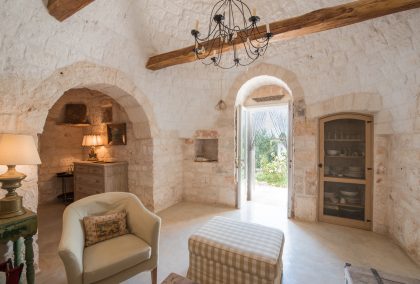 Villa Amaranto is a magical corner of paradise located in the heart of Itria Valley in Puglia. The view is made up of gently rolling hills, plantations of centuries-old olive trees and trulli with their typical cones. This luxurious holiday villa is close to the sea, just 20 minutes drive from the  long sandy beaches of the Adriatic coast, where you can find a solitary corner, or select one of the numerous organized beaches at the top for your needs. Among the towns to visit nearby is Ostuni, with the absolute white of its houses, as well as Locorotondo and Alberobello mostly famous for the countless trulli. Interior This wonderful luxury and charming property consists of two groups of trulli and a “lamia” a single typical small building. The main “trullo” covers approximately 100 sm, very nicely divided between the living and sleeping areas. The entrance in the living room displays beautiful stone walls and a high cone ceiling with fireplace. The kitchen is well-equipped with a cozy dining area alongside. There is a small relaxation area with sofa and a desk. Also, there is a bedroom with en-suite bathroom and the main bedroom (with en-suite bathroom) that has access to the garden. The second trullo […] 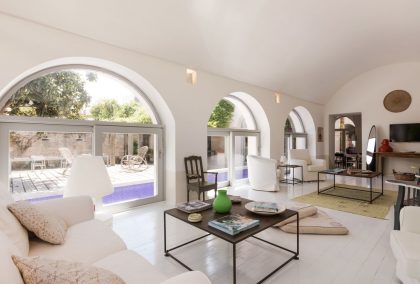 Villa Battaglia is an irresistible blend of traditional architectural features, elegant ambience and immaculate interiors. The property dates back to the 16th century and it achieves to mix the charm and history with elegant and modern touches. It is located in a splendid square in the historic center of a city in the south of Puglia, in the heart of Salento and opens onto a wonderful internal courtyard. It covers a total area of ​​600 s.m. on two floors which can also be divided into four independent units if requested. The villa can comfortably accommodate up to 14 people in four welcoming double bedrooms and two large triple bedrooms, including two additional bedrooms available for children or staff and an attic apartment with two en suite bedrooms that are provided upon request at extra cost. There are six bathrooms in total. It offers large spaces for relaxation, a large and modern dining room for 16 people, and a gorgeous living room with splendid view of the garden. The property includes several modern and fully equipped kitchens. The garden includes a fabulous long swimming pool. The swimming pool area is equipped with deck chairs and sun loungers on a wooden deck and a welcoming outdoor patio […]

Our professional & caring team is constantly searching for unique villas & boutique hotels in locations of cinematic beauty & charm, unaffected by mass tourism in order to offer you unforgettable pleasures on your holidays.