Italy is one of a kind destination in nature, history and creativity. Its charm is expressed in its ambience, in its craftmanship, in its gastronomy, in its magnificent perception of the quality of life as “dolce vita”. Our portfolio has been expanded in this region of the Mediterranean with a selection of distinctive properties encompassing the fairy-tale countryside of Tuscany, fascinating Umbria, emblematic Apulia, cinematic Amalfi and marvelous Sicily.

Sicily is the largest island in the Mediterranean Sea, a destination that combines the Hellenic, Roman, Arab, Byzantine and Norman cultural elements. It is known for its 77 nature reserves and the 5 regional parks as well as the volcanoes, the beautiful beaches the undulating hills, the unique architecture shaped by several civilisations, the art and lastly the exceptional cuisine.

Sicilian cuisine has strong African and Arab influences and the flavours are mixed with Italian recipes and traditional flavours. Apart from pasta and seafood dishes, it is worth tasting the popular street food of Catania and Palermo as well as the varieties of meat and salami.

The island’s capital, Palermo, has an abundance of choices to visit, plenty of restaurants and cafes, sights such as the Cathedral, Zisa Castle known for its collection of islamic and local art, Teatro Argento, the neoclassical Massimo Theatre and others. 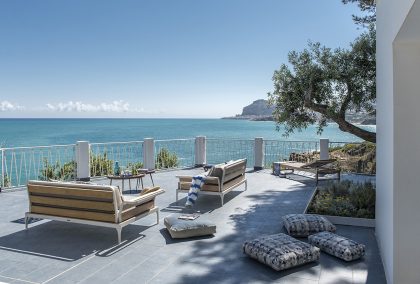 A  marvelous beachfront villa near the area of Palermo, beautifully positioned on a cliff with easy and direct access to the private beach. A garden with olive trees offer a pleasant ambience and ideal conditions for relaxation with stunning  views of the Tyrrhenian Sea. The property accommodates up to 10 people as it has 4 double bedrooms (possible to add 2 extra beds in the living room) and 5 bathrooms (4 of them have shower cubicle and one has a bathtub). Layout The villa has 2 floors and covers about 200 square meters. On the first floor there are 4 double bedrooms with en suite bathrooms. On the ground floor, there is a large and fully equipped kitchen, laundry room and guests’ bathroom. All rooms have direct access to a covered outdoor area with garden views that is highly recommended for relaxation. The chic and elegantly designed living room overlooks a large terrace that leads to a stylish outdoor living area by the sea. This welcoming and contemporary designed villa is ideal for groups and families and it is possible to book a week in a period from Saturday to Saturday. Facilities and services included Private beach access Wi-Fi Air conditioning Washing […] 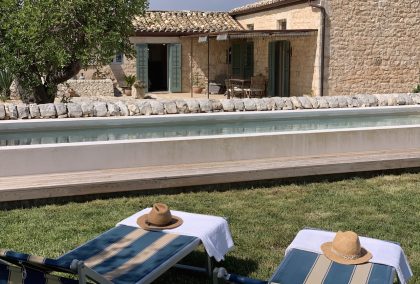 This charming small country house is beautifully positioned in the heart of the Val di Noto, spread over in a plot of 110 square meters with more than 3,600 square meters of land, and  equipped with a generous size swimming pool (8X3) pol. It is the ideal holiday destination to explore the Baroque character in the south east of Sicily and visit Modica, Ragusa, the natural reserve of Vendicari, Pozzallo and Syracuse. The beautiful beaches of this part of Sicily are only a few kilometers away. Layout The property can accommodate up to 6/9 guests. It has 3 bathrooms as well as 2 double bedrooms (possible to add extra bed) and a bedroom with two single beds that can be also converted to double bed (possible to accommodate extra person in a sofa bed). There is a double gate to enter the property. One of the double bedrooms has space for an extra bed. The second bedroom can be with a double bed or with 2 single beds + a possible sofa bed. In the annex there is another bedroom with a private bathroom and the possibility of adding an extra bed. Inside you will find a parking area where […] 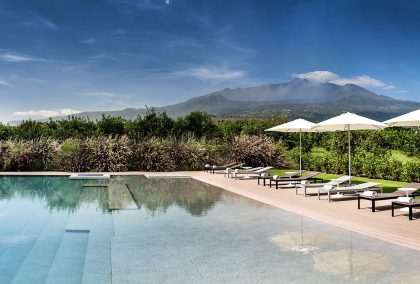 Villa Venuti is a splendid luxury villa with extensive Mediterranean gardens and just a few steps from the sea. The villa is positioned in a unique setting in Eastern Sicily. It has rooms created with the identity of a typical Sicilian house. The interior displays objects, elements and materials  that harmoniously align to the Sicilian character. The interiors blend contemporary taste with traces of the past. There are no excessive ornaments, because it is intended to give the guest a sober and welcoming atmosphere, in a bucolic and quiet context even near the sea and about 1 km from the nearest city center. It is highly suggested for several activities such as wine and food tours,guided excursions on Mount Etna, organized itineraries on the cultural trail of the Sicilian history, sailing boat and motor boat trips. Interior Layout There are 9 bedrooms on the first floor, alternating with views of Mount Etna or towards the sea. In the ground floor, there is a very large bedroom with access to the garden, with a large bathtub for 2 in the bedroom and a sofa bed. This option is ideal for parents with children  that wish to have a separate bedroom with separate […] 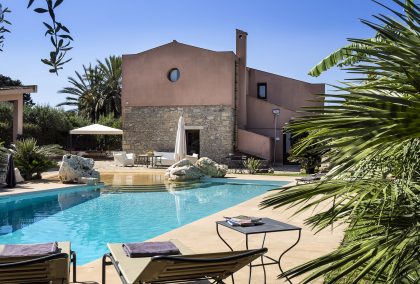 Sitting in a beautiful position only 20km from Trapani, this attractive property blends comfortable interiors with charming countryside landscapes. The villa  is spacious enough to comfortably accommodate up to 16 people. It offers privacy in a stunning countryside and great communal areas for gathering together. Its wide terraces and  swimming pool area  are the ideal  spots that incorporate all the necessary elements to admire and enjoy this lovely landscape.  Interior decoration is in a charming  countryside style with practical accommodation and welcoming ambience. All eight bedrooms are en suite with bathrooms-showers and they provide A/C units, minibar and LCD television. The nearest village is less than 400 mt far from the villa. It is highly suggested to visit  the charming towns nearby and the archaeological sites , such as the medieval old town  of Erice, Segesta temple, the island of Mozia, the Zingaro’s natural reserve,  Egadi Islands, Marsala’s salt pans and the beautiful Trapani. LAYOUT INSIDE Ground floor: a living room with fireplace, sitting room,   bathroom-shower, open space kitchen and living room, laundry, a bathroom-shower, 2 double bedrooms with  en suite bathroom-shower, 1 twin bedroom with en suite bathroom-shower 1st Floor :  kitchenette, 1 double bedroom + 1 single bed with  en suite bathroom-shower, 2 double […]

Our professional & caring team is constantly searching for unique villas & boutique hotels in locations of cinematic beauty & charm, unaffected by mass tourism in order to offer you unforgettable pleasures on your holidays.